How to stop making bad choices 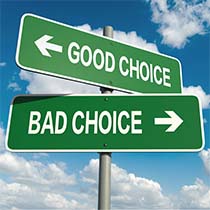 Why is it that we sometimes make good decisions and sometimes we make bad decisions? Is it impulsiveness? Impatience? Pressure?

In this article, I’ll give you a few tips about how to learn to stop making bad choices from now on.

Analyzing and understanding the differences in our decision-making process can make all the difference moving ahead in your life with confidence and without regrets.

So, where do we start? Well, we start by looking at the NLP VAK process

No idea what the VAK Decision Making Process is?

VAK stands for Visual, Audio and Kinesthetic modalities (See more about modalities here in our article Primary Representational Systems). So in NLP when we refer to VAK, we are referring to the way a person processes information using these modalities.

Decision making when using VAK is a similar sort of thing, the basis is the same but with some differences. Let’s get into a bit more detail to understand how to use VAK to stop making bad choices.

What’s going on in your mind when you make a decision? Try this little exercise to get an insight.

Think about the best decision that you ever made. How did you come to the decision? Did you talk to anyone about it (auditory)? Did you form a picture in your mind of what you wanted (visual)? Did the thought of having or doing it make you feel good (kinesthetic)?

Now, think of a bad decision you made, one you regret. How did you come to that decision? Did you get input from others (auditory)? Did the idea make you feel excited (kinesthetic)? Were you swayed by the way something or someone looked (visual)?

By reviewing your good and bad choices, you can see what areas, or modality, you focused on when making the choice. To make a good choice, according to NLP, you must include each modality – Visual, Auditory and Kinesthetic.

How was the process different for the good decision vs. the bad decision?

To drill into this a bit further. For a decision to be one that has a chance of being a good one it’s not just about what needs to be there (V / A / K) but also about what might also be missing.

Examples of the visual component could be liking the look of something you want to buy, seeing yourself in the environment you want to move to, or seeing the beautiful person you want to marry.

An example of kinesthetic could be the feel of a new car’s leather interior, a feeling of happiness when you are around that certain someone special, the excitement of starting a new relationship. Kinesthetic can be an external touch or an internal feeling.

An example of auditory could be talking your decision over with someone or talking to yourself.

Now, when you have implemented all elements of VAK, technically, it should result in a good decision, right?

So, we have on the face of it the chance for a good decision. We have the V / A / K components in place. Great!

K – Kinaesthetic – You like the feel or the feeling

A – You have heard something.

Now the key to me is in making sure that all of the elements are positive. Remember I said missing the auditory part is going to have a high chance of leading to a bad decision? Well, here’s the thing. The auditory part can be present, but if it’s bad it’s not going to be helping much.

If it is auditory external (in the form of someone talking to you) make sure it’s helpful to your goal. And that doesn’t just mean what you want to hear!

Think about when you were a teenager. Your parents would try to tell you not to do this or that. You would say, “You know what, I know best. That’s all very interesting but……”

Or, you would tell your friend an idea and he would encourage you to do it, but it was really a stupid idea and he was an immature as you.

Slow down the decision making process!

Even if you do have an auditory component is it helping form a good decision?

You might say that you did talk to someone about the decision. However, they may have been a partner in crime, they might have been the fiancé, the salesman, your buddy. They may simply have been too close to the decision you were trying to make, It may be that you knew this all along and were just looking for validation rather than advice!

So, the real challenge with the VAK decision making process is choosing the right auditory tactic and listening, no matter what. Easier said than done.

There is only one reason we don’t do this. We don’t want to be persuaded against what we really want.

Let’s be honest, we know when we are acting impulsively!

To make a good decision and stop making bad choices, you must choose a neutral person to talk with. Ask them questions, listen with an open mind. They don’t have the kinesthetic or emotional connection to the outcome like you do so are going to be impartial.

Then, after incorporating that audio portion into your decision, if you still kinesthetically feel the same way about the decision, go for it!

VAK is a great technique to keep in mind, and by implementing it, you will make much better and clearer decisions.

Try it out, it really helps!

Our blog page has many more articles for you to read.

Alternatively, head over to our NLP glossary where you can find a list of NLP terms with lots of links to articles.

If you'd like to find out more about our courses where you can learn more head over to our courses page.

Sign up to our newsletter and receive a free brochure.

Fill in your details below and we'll send you a confirmation email with a download link.

Get in touch, we’d love to hear from you.

Get your free copy of

To receive your brochure please sign up to our newsletter with your details below.